It has been a crisis like no other, shutting shops and schools, closing borders and putting half of humanity under some form of lockdown during the spring of 2020. And it’s not over, with cases continuing to mount worldwide as the death toll approaches one million.

To find out more about what the Coronavirus pandemic has done to the global economy so far, and what might lie ahead, I spoke to Nariman Behravesh, Chief Economist at the consulting firm IHS Markit.

Below is an edited transcript of the conversation.

In a nutshell, what has COVID-19 done to the world economy?

Nariman Behravesh: It has certainly plunged the world economy into a very deep but mercifully a short recession. Everybody’s been hurt. I don’t think anybody’s really been spared by this – it’s a combination of fear, uncertainty and the reaction to the lockdowns. Now, a lot of people blame this deep recession on the lockdowns, but I don’t think that’s a fair assessment. If you look at a country like Sweden, even though they didn’t do a lockdown, their economy still suffered pretty severely. It is mostly the uncertainty and the fear of catching the virus that is stopping consumers going to the places they normally would, and that’s hurting the economy.

Looking at historical precedents, it’s about three times as bad as the global financial crisis of 2008 in terms of GDP decline on an annual basis. It’s not quite as bad as the Great Depression in the 1930s, where the output drop was sustained over a three to four-year period, and the unemployment rate went up to 25% in the US. This time so far it only went up to 13% in the US, but it’s the worst downturn we’ve had globally since the 30s. 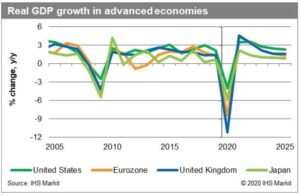 Do you think that, on a global level, the worst economic damage is behind us?

NB: Well, in some sense, the worst may be behind us. In many parts of the world, in many countries the numbers are coming down – although not everywhere. They’re going up in India, they’re going up in Brazil, they’re really not coming down much in the US. So I would say probably globally, the worst is behind us. But you can also argue that the easy part is behind us, because this thing is going to flare up again and again. We’re not out of the woods. So even when we think we’re done, as a number of countries have, we’re not. It probably won’t be as bad as it was last round, in part because the healthcare systems are prepared, but we’re not done with this.

If you look at 2020 to date, which regions have been the hardest hit, and which have weathered it well so far?

NB: Let’s look at countries first. Among the countries that have weathered it well is, of course, China. China technically did not have a recession. It had one quarter of negative growth and then it came right out the other side. Other countries that have done relatively well are South Korea and Taiwan, which did a lot of testing and tracing so they managed to keep things under wraps compared to the countries that have done the worst in terms of the virus, such as the US, Brazil and India. That judgement is based on the total number of deaths. But for the death rates, if you look at it on a per capita basis, the US is number 10 rather than one, which is lower than Belgium or Spain, so a lot depends on how you measure it.

In terms of economic performance, Europe has been hit quite hard – the European recession is quite a bit deeper than the US or Canadian or Japanese recession. So, Europe and the emerging world have been hit pretty hard. 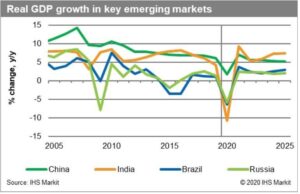 As we go through autumn, how do you expect things to evolve?

NB: We’re coming out of a very deep recession, so we’ll get what we call a technical bounce. Growth in the US for example will look remarkably strong in the third quarter, but then it will fade. We’re looking at what we call a bounce and fade pattern of growth throughout the world. But the bounce is because it went so far it had to come up – but it won’t continue at that strong rate. Just to give you a sense of the US, GDP was down 32% in the second quarter, we think it’s going to be up 30% in the third quarter, but by the fourth quarter back down to 2.5%.

How optimistic are you for a global recovery and what kind of shape do you think that recovery will take?

NB: I think we will see global growth in the third, fourth quarters and into 2021. It will not be a robust growth rate and a lot of it will depend on a vaccine. Obviously, the sooner a vaccine is available and widely distributed, the better the chances of growth, but we don’t really see that happening until the second half of 2021. A vaccine may get developed, but in terms of its pervasive availability, it’s going to take a while.

There’s been a whole alphabet soup of shapes discussed. One could say that manufacturing is probably enjoying a V-shaped recovery, at least temporarily, but services, which were among the hardest hits – especially airlines, travel and entertainment – these are in U-shaped recoveries. People have talked about a W. You probably won’t get a W unless there’s a serious second wave, which I don’t think is likely but it’s possible.

Could you tell us more about the sectors that have been hardest hit, and the ones that are thriving?

NB: Well, the hardest hit are clearly any activities or any industries that depend on large groups of people coming together in a spot, so airlines are a perfect example of this. Air traffic is barely at 25% of what it was at the end of 2019 and it’s not really going to recover for at least another couple of years. Hotels are another example. And there are huge amounts of excess capacity on cruise ships. Anything to do with conferences has also been hard hit.

In terms of the industries that have done well, high tech is of course an example. Obviously, everybody’s ordering from Amazon rather than going to stores but beyond that a lot of industries are looking to accelerate the digital revolution. Ironically, healthcare is also benefiting in some sense, because of the demand.

Is there anything that surprises you, as an economist?

NB: One sector that I didn’t mention that’s done well, and that surprises me, is housing. Why would housing boom? It is in the US, maybe less so elsewhere. Basically, a lot of people are fleeing to suburbs. A lot of people are buying homes, building homes – in my neighbourhood in Boston we’ve seen two people come from New York. We’re seeing people who can afford it just kind of deciding, “Now I’m done with the urban life. I want more space between myself and my neighbours.”

COVID-19 has hit even the richest countries in the world hard. What is it doing to developing economies? And are there lessons from the emerging world that could be applied to wealthier places?

Taiwan and South Korea are notable for their testing and tracing. If there’s one lesson from the experience there, it’s that massive testing and massive back tracing of contacts is crucial to keeping this thing under control. So that’s a definite lesson. But the rest of the emerging world, from Latin America to Africa, are struggling, there’s no question. Aside from the virus itself, they’re being hurt by collapsing global growth and trade and for a while, the collapse in commodity prices. It’s not only the virus itself but events outside of their countries that are then coming back to hurt them.

Looking at the big picture, are we going to see a different kind of economy and a green recovery emerge from the pandemic?

I don’t think it’s going to be business as usual: I think there are going to be some big, big changes happening. We may not see them overnight. It may take some time. But let’s go through a few of them. I think this will accelerate the movement towards a green economy. This is a perfect opportunity for a lot of companies as they look at new, green technologies. I think that’s going to be very positive. But we are going to see a substitution of capital for labour. Skill and labour-intensive industries are very worried about the vulnerability to viruses of all kinds, so you’ll see greater emphasis on robotics, which creates its own challenges, of course. We think that the process of urbanization will slow. I don’t know if it will reverse, but it will definitely slow down. We’ve seen this so-called flight to suburbs occurring. Separately, in terms of the travel and tourism industry, one has to wonder what will come out the other end. Our best guess is that things like business travel will be curtailed quite dramatically. I think healthcare is another area where we will see some massive transformations as we go forward.