During the second quarter of 2020, manufacturing production fell sharply in most countries around the world, with the notable exception of China where output had already returned to moderate growth. On current estimates, UNIDO expects a decline in global manufacturing value added of 8.4 per cent for the year as a whole, which would make 2020 the worst year on official records for the sector.

VIENNA, 3 September 2020 – In the second quarter of 2020 (April-June), global manufacturing output fell by 11.2 per cent compared with the same quarter in the previous year, according to official figures from the United Nations Industrial Development Organization (UNIDO). The dramatic drop reflects the economic impact of measures imposed to halt the spread of COVID-19, which overshadowed all other negative influences on the sector, including higher trade barriers and the impact of Brexit.

UNIDO anticipates ongoing disruptions to manufacturing over the coming months as the world continues to grapple with the impacts of the pandemic. “Based on this scenario, and on developments in manufacturing linked to other economic variables, UNIDO is forecasting a fall in global manufacturing value added of 8.4 per cent in 2020, which would mark the biggest collapse in output since official records began,” UNIDO Chief Statistician Fernando Cantu said.

Some countries are likely to be harder hit than others, with China expected to record a more modest drop of 1.6 per cent compared with the United States and Europe’s industrialized economies where value added in 2020 is forecast to plummet by 15 per cent and 14.3 per cent, respectively.

Cantu noted, however, that more time was needed to assess the full impact of containment measures on households, businesses and government balance sheets. In addition, he cautioned that “recent developments in several countries point to a possible second wave of the pandemic, which could require the return of harsher economic restrictions, with knock-on effects on supply and demand”.

Figures for the second quarter show a wide divergence between China and the rest of the world, as well as between and within developing and industrialized economies. China was one of the first countries to impose a lockdown and most of the impact was felt during the first three months of the year. By the second quarter, China’s manufacturing output had already returned to growth, increasing by 2.8 per cent year-on-year, led by industries such as computer electronics (11.2 per cent), electrical equipment (6.8 per cent) and machinery (6.3 per cent). 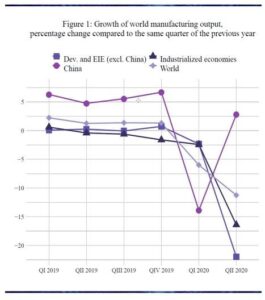 On the other hand, the data for developing and emerging industrial economies (excluding China) show a markedly gloomier picture, with second-quarter output plunging by 22 per cent on the year following a 2.3 per cent drop in the first quarter.

The hardest hit geographical region was Latin America, where manufacturing output fell by 24.2 per cent year-on-year, followed by Asia and the Pacific, which saw a 23.7 per cent drop.

In industrialized economies, second-quarter manufacturing output sank by 16.4 per cent as economic recessions started to bite in many major economies. Europe’s manufacturing production dropped by 19.3 per cent, making it the worst-affected industrialized region, according to the UNIDO report. The sharp decline intensified a trend seen in previous quarters, particularly affecting export-oriented economies, amid ongoing trade frictions with the United States and the uncertainty surrounding the United Kingdom’s departure from the European Union.

Given the characteristics of the ongoing COVID-19 crisis, there were substantial differences in manufacturing output per sector in recent months. For example, production of essential goods and supplies, such as food and pharmaceutical products, was less affected than other industries. Production of basic pharmaceuticals in all country groups in the second quarter of 2020 showed moderate growth, while the production of capital and durable goods, such as machinery and motor vehicles, dropped sharply over the same period due to shrinking demand.

All data and analysis is based on seasonally adjusted data.