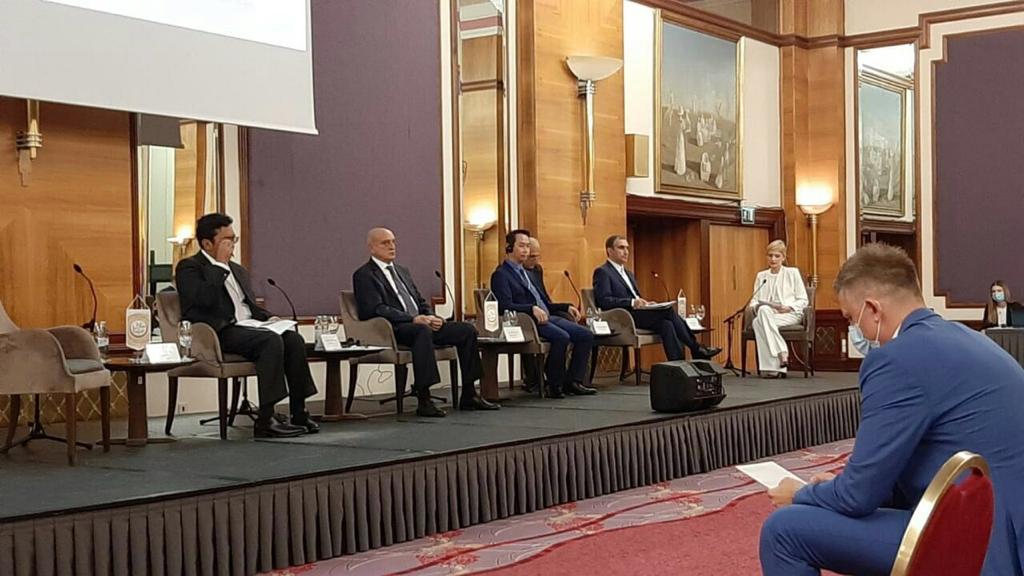 With the presence of the Iranian Ambassador to Croatia, the existing capacities, problems and solutions for the expansion of economic cooperation between Iran and Croatia were discussed at the “Zagreb 2021 Halal Trade Conference”.

The conference was held on Tuesday (September 21st) with the participation of officials from the Ministry of Tourism, the Chamber of Commerce, the Mufti and the President of the Islamic Center of Croatia, trade representatives from the Balkans and Central Europe, several ambassadors from Islamic countries, heads of companies and active Croatian traders in the field of Halal industry .

Parviz Ismaili, Ambassador of Iran in Zagreb, together with the Ambassadors of Malaysia, Azerbaijan and Indonesia participated in the specialized meeting of the conference and replied to questions about the structure and capacity of Halal industry in Iran, existing problems and solutions to expand Halal trade between Iran and Croatia.

In response to a question about the value of trade and Halal market trends in the Islamic Republic of Iran, he responded: “According to the latest international economic reports for 2020-21, Iran has the ninth position in the index of Halal industry in Islamic countries.” Which is divided into sections; The fourth place in medicine and cosmetics, the sixth place in Halal food, the tenth place in clothing, the eleventh place in Islamic tourism, the 12th place in entertainment and computer products and the 12th place in finance and Halal insurance can be mentioned.

“Iran has a diverse, unique and very profitable capacity, but it is less known in the field of Halal industry” he added and emphasized “Were it not for unilateral and oppressive US sanctions against the Iranian people, Iran would certainly have a much higher position in the world Halal trade cycle. At the same time, Iran, with a population of 85 million and transit advantages, is at the heart of a market of 500 million people for Halal products”.

Meanwhile, he pointed out that many goods and services related to Halal trade are out of sanctions, and Croatian companies can cooperate with Iran with the least difficulty.

Parviz Ismaili, in response to another question about the structure of the Halal industry and the best and fastest way to communicate with the Iranian Halal market  mentioned: “Halal World Institute that is affiliated to Islamic Chamber Research and Information Center (ICRIC) and Iran Chamber of Commerce, Industry, Mines and Agriculture operates as an international entity under the auspices of the ICCIA and the OIC, and covers more than two thousand companies. It has offices in different parts of the world, including Germany, Austria, Azerbaijan, Turkey, Japan, etc., and is ready to expand research and trade cooperation with Croatia.

He also continued about the “advantages, disadvantages and possible problems of communication with the Iranian Halal market”: The most important advantages of Iranian Halal goods are variety, very high quality and a balanced and competitive price. In some cases, such as saffron, caviar, and nuts, Iranian products are exclusive and have the highest international standard. The most important current problem is the lack of communication and information of companies operating in the two countries in the field of Halal. Due to the sanctions, financial transactions of traders as well as transportation are difficult, and the Iranian embassy is ready to provide economic advice to interested companies and provide solutions.

Iran ambassador, while stating the latest statistics on the source and destination markets in Iran’s Halal trade, said: Croatia needs all kinds of fruits, nuts, dates, saffron, medicinal plants and beverages, oilseeds and Halal leather products, and companies In addition to supplying these goods, Iranians are ready to jointly produce and diversify products with Croatian companies.

Addressing the officials and activists of the Croatian tourism industry, Parviz Ismaili noted “Iran, with a civilization of at least 7,000 years and unique nature and historical monuments, is the most economical and amazing destination for tourists in Europe and the world.”

In response to a question from the conference host on the necessary solutions to strengthen economic cooperation between Croatia and Iran, he added: “Fortunately, the agreement on avoiding double taxation has been implemented between the two countries and two important agreements to support investment and customs cooperation between two governments have signed and will be implemented soon.

He continued “In my opinion, the most important step right now is the establishment of a joint chamber of commerce between Iran and Croatia. The National Chambers of the two countries have already agreed on this issue, and we are waiting for the action of the Croatian side in this regard, according to the negotiations with the head of the Croatian Chamber. Another problem is the lack of knowledge of the companies of the two sides and the relationship between them that the formation of a “joint chamber of Iran and Croatia” can solve this problem and accelerate relations between the two countries”.

It should be noted that a set of necessary information about the structure of Halal industry in Iran, the introduction of the Halal World Institute affiliated to the Iranian Chamber of Commerce and also a statistical report of the most important companies in Iran’s Halal industry were provided through the conference secretariat.