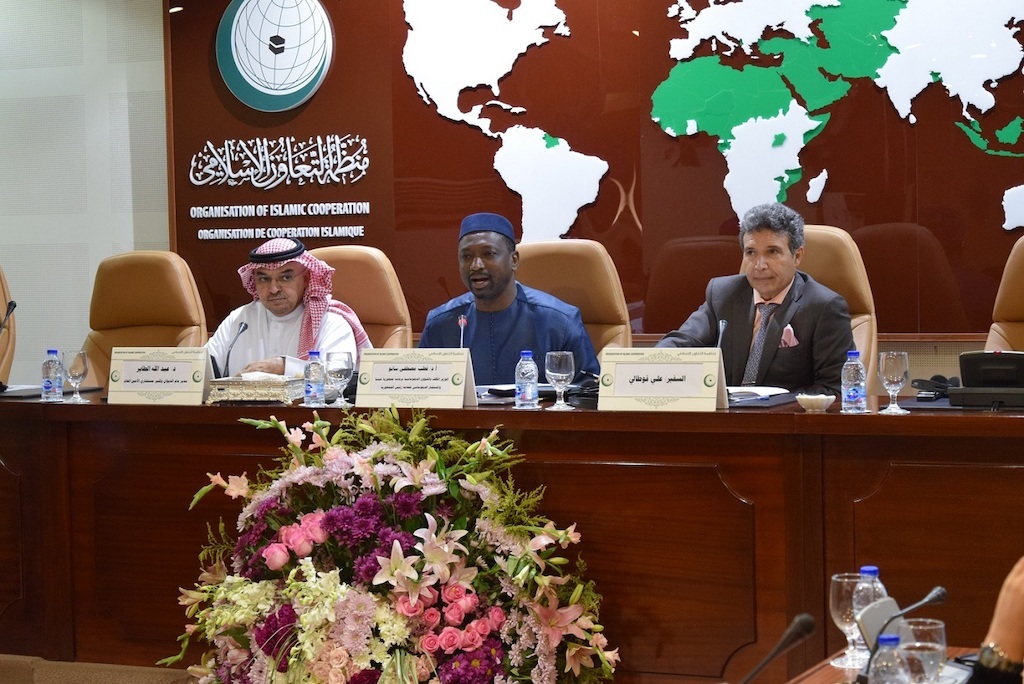 Dr. Qotb Mustapha Sanou, Minister in charge of diplomatic affairs and diplomatic advisor to HE the President of the Republic of Guinea, said in a lecture he delivered at the Organization of Islamic Cooperation (OIC) on 16 September 2019, “Fear from Islam, or Islamophopia, is contingent upon Muslims, their conduct and the manner in which they –individually– project this noble faith which, in fact, does not carry in its texts any advocacy of bloodshed”.

The lecture was delivered within the framework of the “OIC lecture series” under the theme of “Culture of Fear For or From Islam: A Critical Perspective” in which Dr. Sanou highlighted the need to engage in an exercise of self-criticism to dig out the reality, and drew attention to the adverse fact whereby “undue fear for Islam” could lead in the end result to the export of a negative message by some erring Muslim individuals or groups, which then could give rise to Islamophobia.

Again, in this lecture which was facilitated by Dr. Abdullah Bin Moussa Al Tayer, Director General of Cabinet at the OIC and Senior Advisor to the OIC Secretary General, and which was hosted at the OIC headquarters on 16 September 2019, Dr. Sanou presented various definitions of the concept of “fear” stating first that it is “a certain behavior resulting from a feeling of insecurity”. He noted that there were two types of “fear”, the first being rational and the second rather devoid of reason, under which he placed the phenomenon of Islamophobia, which has pervaded the West and certain other parts of the world.

Dr. Sanou also noted that the violence perpetuated by fanatic and terrorist groups, in their extreme forms, as well as the conduct of certain individuals among Muslims residing in non-Islamic States or even among those residing in their own Muslim states, provide negative examples that do not respect the general ethics nor even the minimal level of the requisites of social relations, engaging in lies, cheating and disruption, all of which are facets that give the West and others negative images about Muslims and leave a false impression of Islam.

Dr. Sanou, having totally refuted any link between the scriptural word of the noble Islamic faith and the negative behavior of certain individuals who claim to belong to this religion, concluded by asserting that the West has received a wrong image about Islam, an image that erroneously projects Islam as a religion that advocates violence or bloodshed.

Dr. Sanou went on to say that the duty of establishing justice, enforcing the law and declaring wars falls within the attributions of the rulers in Islam, according to both text and practice; and it is not permissible for individuals to engage in interpretations that imply the right to sanction others or to declare wars, such acts being, he said, clearly in conflict with the text and a crime and grave sin which is met by Allah’s punishment against anyone who carries them out.

He further noted that Islam never ever opposed civilization and never denied other cultures their specificities, and affirmed that Islam was in no way in danger or needing anyone to carry arms in its defense with irresponsible and senseless actions that could only tarnish the image of Islam and its followers.

It is worth mentioning that Amb. Ali Goutali, Director of the Department of Palestine and Al Quds had inaugurated the lecture by giving an introduction of the lecturer’s CV highlighting in particular his rich academic and professional background, which includes many awards, publications and other achievements.