Kick for Trade: UEFA Foundation and the International Trade Centre team up to support social inclusion for youth 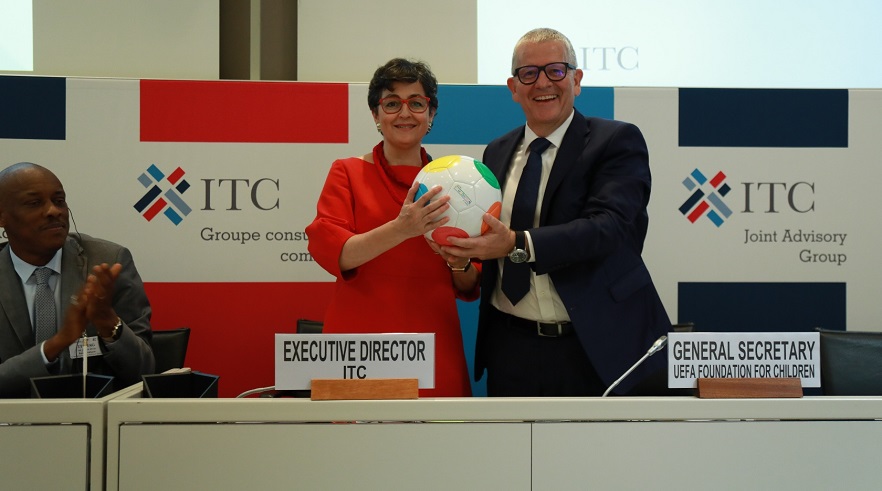 Kick for Trade: UEFA Foundation and the International Trade Centre team up to support social inclusion for youth

Football at the heart of Kick for Trade, a new pilot initiative by the UEFA Foundation for and the International Trade Centre to boost youth employment and inclusive development

(Geneva) – The UEFA Foundation for Children and the International Trade Centre announced today the development of a new initiative – Kick for Trade – that will embrace football to ensure greater inclusive development and boost youth employment. The first projects of the new initiative will kick off in Guinea and The Gambia.

A letter of intent formalizing the partnership was signed by Urs Kluser, Secretary-General of the UEFA Foundation for Children’s Secretary General, and ITC Executive Director Arancha González during the 53rd meeting of ITC’s Joint Advisory Group held in Geneva, Switzerland.

Globally, more than 59 million youth are unemployed and nearly 136 million of working youth continue to live poverty. Young people are often prevented access to decent employment opportunities or the possibility to create their own enterprises due to such issues as skills mismatch or lack of access to finance. Such barriers to employment and entrepreneurship stand in the way of youth utilizing their skills, having their voices heard, and actively shaping an environment of decent work and successful trade that works for them.

Announcing the new partnership ITC Executive Director Arancha González said: ‘‘Through Kick for Trade, ITC and the UEFA Foundation aim ensure that youth are part of the game and are resources to be taken seriously. In Guinea and the Gambia we will demonstrate that it is possible to have fun while learning new skills, and that vocational training, entrepreneurship and football can be a winning formula.’

UEFA Foundation Secretary-General Urs Klauser said: ’Football for development have proven to be a catalyst in order to convey messages, methodologies that reinforce youth social and economic inclusiveness in many countries. This partnership will allow both the UEFA foundation and ITC to keep the ball rolling for the benefit of the youth.’

Youth employability is at the top of the agenda of both ITC and UEFA Foundations. The initial focus of the Kick for Trade partnership will be around country-based approaches in Guinea and The Gambia, and activities will be developed in collaboration with local incubators, youth associations and youth centers.

The International Trade Centre’s refreshed Youth and Trade programme will serve as key anchor in navigating youth skills development and entrepreneurship in the partnership. This Kick for Trade initiatives will use result-oriented approaches to shape youth entrepreneurship and employment through sports and particularly football. Kick for Trade will provide people from different backgrounds with the skills and resources to actively make a difference in their own lives and the lives of those in their communities.

Note to the Editor

About ITC – The International Trade Centre is the joint agency of the World Trade Organization and the United Nations. ITC assists small and medium-sized enterprises in developing and transition economies to become more competitive in global markets, thereby contributing to sustainable economic development within the frameworks of the Aid-for-Trade agenda and the United Nations’ Sustainable Development Goals.