Journal of Economic Cooperation and Development, Vol.40 No.1 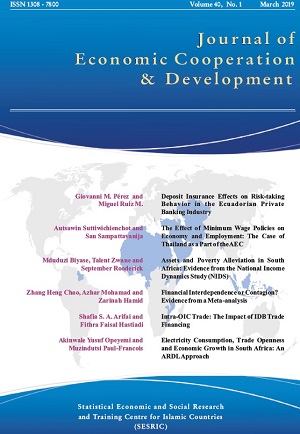 Considering the prevailing and recent major economic developments in the OIC Member States, ASEAN economic communities and South Africa and the links between these developments and those of developing and developed countries as well as the world economy as a whole, this issue of the Journal of Economic Cooperation and Development – March 2019 analyses trends in the main economic indicators of these countries based on recent projections regarding risk-taking behaviour in the Ecuadorian private banking industry and the effect of minimum wage policies on economy and employment of Thailand. It highlights assets and poverty alleviation in South Africa and provides a meta-analysis approach to investigate the statistical significance of financial contagion based on past empirical contagion studies. This issue also analyses the determinants of intra-OIC trade and the impact of IDB trade financing on intra-OIC trade and examines electricity consumption, trade openness and economic growth in South Africa.

The first article examines the effects of deposit insurance implementation on risk-taking behaviour in the Ecuadorian private banking system. Aggregated financial annual data of private banks financial statements from January 2007 to January 2015 were used. Time series analysis employing system-wide financial ratios are meant to support the hypothesis that the levels of risk increased after deposit insurance was implemented in Ecuador on May 2009. In addition, the increase of risk-taking behaviour was observed to be mainly driven by large banks, which hold more than 60% of the banking system assets in total. This can, in fact, easily have devastating effects on the insurance system and the whole economy if the moral hazard problem is left unattended.

The second article attempts to estimate the impact of wage policies on the economy and employment of Thailand as a part of the AEC. The paper also suggests appropriate policies for a sustainable Thai economy in the long run. The results indicated that negative correlations between minimum wage and the gross domestic product, and minimum wage and employment are the result of higher costs of production. Therefore, in this paper, increasing minimum wage or subsidy wage policies are not appropriate for Thailand under the AEC because these policies would reduce investment and reduce incentives to accumulate human capital. The study found that increasing labour productivity can compensate the effect from these negative wage policies. However, a lower minimum wage led to an increase in the gross domestic product, investment, and employment for both the skilled and unskilled labour force in every sector.

The fourth article investigates the phenomenon of financial contagion in numerous pieces of research. In spite of its severe implications for the stability of domestic financial systems as well as potential diversification benefits of international portfolio investment, there has yet to be universally agreed conclusion on the relevance of financial contagion. Therefore, this study has been designed to apply the meta-analysis approach to investigate the statistical significance of financial contagion based on past empirical contagion studies. As implications, policy makers should establish contingent credit lines to ensure the liquidity of financial market during the turbulence time, and portfolio investors should diversify away from the potentially contagious markets. It is suggested that future contagion-based meta-analysis may include contagion studies with different methodologies, as well as meta-regression analysis to provide more insights on the sources of variability in the contagion studies.

The fifth article tries to shed a light on the determinants of intra-OIC trade and the impact of IDB trade financing on intra-OIC trade. By using gravity model both the intuitive and the theoretical one; this article observes eighteen OIC countries from 2000 until 2014. It finds that GDP, distance of two capitals, IDB trade financing, common language, common colony, colony, landlocked, contiguous, the Arab Spring events and Asian as PTA are statistically significant factors in determining export. In the end, this article focuses on producing an output that can guide OIC member countries and IDB in developing a trade-financing scheme meant to increase intra-OIC trade.

SESRIC and its JECD team will continuously work to serve its readers by consistently screening the most appropriate articles with long-term valuable and constructive information, which will be useful and serve the best interests of the OIC countries by upholding their commitment to contribute to the expansion of economic and technical cooperation among them on a long-term basis and beyond.